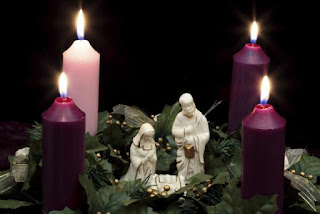 Sunday December 3rd marks the first Sunday of Advent this year, which means that today, Monday 11/27 is the first day of the advent season. I like Advent, not as much as I like Lent, but Advent is still pretty cool, because anticipation is a big part of why exciting things are exciting. When we know we have a cool event coming up, thinking about that cool event helps build up to making it amazing. Thinking all day about the awesome dinner you have planned, waiting for the moment when you and someone you like share your first kiss, foreplay leading up to climax, all of those things serve to create the powerful experience of the moment which we anticipate.

Ritual magic can work that way as well. We do a series of actions and we put together various forces, call upon various spirits prepare ourselves, our space, and our tools, and all of it works to create a moment in which we're able to communicate either through a singular action or statement what we want or need. Maybe we perform a Mass and prepare the species of communication, and draw together the forces of transubstantiation and in a singular moment the material is changed and is brought into us to change us. Maybe we're engaging in some Kabbalistic magic and we build a path for the forces of creation by juxtaposing symbols and finally we ground the divine light in a talisman by writing a divine name. Maybe we conjure a spirit, and we bathe, cast our circle, call our intermediaries and gatekeepers, talk to our ancestors and call upon a spirit to accomplish the work we need with the support of these various allies, and we still reach a moment where we explain what we want, offer what we'll give for it, and ask the spirit to go do the work. Everything involves preparation, and with it anticipation of the moment where we make things happen.

With magic we further have the anticipation that occurs between doing the magic and waiting for the result. We recognize the importance of not dwelling upon or obsessing about what we've done and the magic working to make it happen. But we also can recognize the utility of doing things to support our magic. Other related magic, mundane activities related to our goal. Whatever we need to support it getting done. Just like anticipation helps make getting what we want more exciting, the supporting work we do along the way to meeting our goal helps make our goal happen. Either way, while we're waiting, the excitement builds.

Another element of magic is knowing the landscape. We have to look at the various forces at play in the world that affect what we're doing. What are the positions of the stars and planets and how does that impact occult forces? What in my life would make it easy for this to manifest? What would make it hard for this to manifest? Am I willing to accept into my life what I'm trying to create in my life? Are other people competing to get the same thing and can we all get it? Are other people working to support me? Are other people working to stop me? Are their cultural powers at play that make a particular time more powerfully aligned to my goal?

This is where Advent comes into play.

I'm sure a lot of people who read my blog utilize Christian elements in their magic, some might be Christians, some might just use Christian elements of magic. I'm sure a lot of other people who read my blog don't connect to Christianity at all. Regardless of which group you fit into the idea here isn't about engaging in Christianity it's about utilizing a current of force in which countless people around the world are engaging, a current of force which creates a time focused on creation, focused on bringing something into the world. Advent is about anticipation, and maybe most people engaging in it ritually are focused on anticipating Christ, but an unimaginable number of children across the world are anticipating Santa Claus and receiving gifts, obtaining material objects. There's room for anticipating whatever you want.

The season is also set up in a kind of magical structure. You have four weeks, so a week for each element and a day for each planet. So as you work on building your creation you can progress through manifesting the various forces as they pertain to your goal and reflect them cascading into creation as they progress through the elemental worlds.

The first week of is Hope, the second is Love, the third is Joy, and then Peace, finally Christmas is the arrival of Christ.

Hope is the initial stirring towards creation, the beginning of anticipating what we desire. The initial spark of fire that brings forth a concept and begins energizing it into being.

Love draws things together just as a cup begins to coalesce all the attributes and associations of a concept that give it color and sensibility before it is defined into a form.

Peace is the acceptance of a thing, the realization that the thing is coming into being, that moment of settling because you know it's about to be real and you'll actually get to experience it. You've prepared the tray on which everything will be set and it waits for the thing itself which is about to be real.

So you have fire, water, air, and earth. The days of the week are pretty obvious for the planets.

So from there it's just a matter of identifying what you want and understanding the pieces of its processes towards coming into existence. Then you just need a few minutes for daily work to bring it into being and ride the current of millions of people anticipating a moment of creation.

The elemental prayers from Levi, and the Orphic hymns, or Liber Cordis and Liber Lapidus Lazuli are options for evoking the elemental reality and the planetary force and then a simple statement of what you want to bring into being. Possibly lighting a candle and incense. Basically building a current of force towards your goal. Then finally at Christmas perform the actual ritual, in the style of your approach to magic to finalize those preparations and channel that anticipation into creating your goal.
Posted by BJ Swain at 10:01 AM No comments: