Wolfenoot is Here! Some reflections on the spirit of the Great Wolf 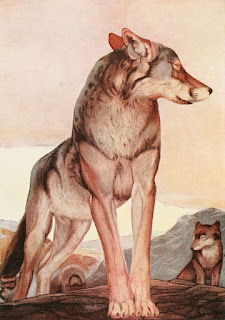 So before I get into today’s post, I have to note that it’s been a long time since I’ve done a blog post. I appreciate that you’re still here reading. I have been busy working on a book, Living Spirits: A Guide to Magic in a World of Spirits, it will be out soon so I hope you’ll follow us on Facebook so you’ll get all the updates and announcements about it.

With that out of the way…Wolfenoot. I would say that if you’re unaware of Wolfenoot you’ve probably not been on social media in the last six months, but yesterday was apparently when Rufus Opus first discovered it, after seeing me comment on the lack of Wolfenoot cakes at the grocery store. So in case you have not heard the story of Wolfenoot…

A little boy in New Zealand explained to his parents that November 23rd was the anniversary of the Great Wolf’s death, and to commemorate it there is a holiday celebrated then, Wolfenoot. On Wolfenoot the spirit of the wolf goes around and leaves presents for everyone. People who are kind to dogs or who keep dogs get better presents. You eat roast meat, and cakes decorated like the full moon to celebrate.

Pretty simple, and yet, pretty awesome. You might wonder why I’m writing a blog post about it…but if you’ve followed Glory of the Stars on Facebook you’ll have noted that we’ve shared quite a few Wolfenoot oriented posts. I’m pretty excited about the idea. New holidays are cool…a calendar full of holidays is also cool and is in keeping with more traditional Pagan experiences. The holiday originating with a child is pretty cool, and the fact that his parents put it out into the world to see how far his idea would spread is amazing. The huge positive response and massive number of people ready to adopt the holiday is also pretty nifty. So it’s got a certain coolness factor.

Beyond the coolness factor though it’s pretty germane to stuff we talk about here. The holiday celebrates wolves and dogs, but in particular the spirit of the wolf, who sounds like some sort of animal guardian spirit, is a central figure. So you basically have a holiday for a nature spirit. It’s even possible that the boy was inspired by a nature spirit. Children are often more perceptive to such things. As far as I know the boy hasn’t explained much about where the holiday came from. So we’ll never really know. But in my mind, it’s a good opportunity for engaging certain nature spirits.

John Beckett on Patheos wrote a good piece on the idea of natural religion and spirituality and used Wolfenoot as an example of how even if we had a world devoid of religion humans would find ways to celebrate meaning and connection. He talked about the Pagan feel of the holiday, which itself is not Pagan, as he also noted. The holiday does not come from any traditional Pagan canon, and the boy’s family has not, to my knowledge, expressed any Pagan affiliation. The holiday is just there for everyone, especially people who love or care for dogs. This openness has an element that reflects man’s earliest religious experiences, before competing cultures created concepts of religious affiliation. For people working in a world of spirits this kind of approach is entirely sensible, because the spirits are there doing their thing regardless of your religion or beliefs.

So the spirit of the wolf. Since this was originated by a little kid there is not a lot of detail. So we have to look at some other sources to build a concept. So…what is the wolf to us?

If we look at mythology and folklore, for me the first obvious thoughts are Garm and Fenrir. Both wolves are associated with the Ragnarok, the Doom of the Gods. Garm guards the entry way to the land of the dead, howling as a herald of the Ragarok. His howl is associated with the breaking of Fenrir’s bonds, after which Fenrir, the ravener, will run free, eat corpses, and swallow the sun, all before he kills the Allfather, Odin, in the battle which will take the lives of many gods.

Garm and Fenrir certainly don’t seem like the spirit of the great wolf who gives presents to those who are kind to dogs, but they are not the only important wolves in the North. Odin himself is accompanied by two wolves, Freki and Geri. Odin is described as living on wine alone, and giving all the food of his table to his wolves. Some scholars have suggested that Odin, his wolves, and his ravens, form a sort of singular entity representing the symbiosis of hunting allegiances from our prehistoric past. In the case of Odin his ravens bring him knowledge and hold it for him, his wolves, who are called greedy or ravenous, bring nourishment.
There is a cyclical element to this. Fenrir is also called “ravenous” and Garm, and Geri have names tied to the same linguistic origin. So the wolves that are the companions of Odin are mirrored in the wolves that spell his doom. This is so much the case that while Odin feeds Freki and Geri, he will eventually end his life as food for Fenrir.

This still doesn’t tell us much which is too linked to the Spirit of the Great Wolf, at least not at first glance, but it does tell us something about nature spirits. While Fenrir is not a nature spirit and neither is Freki, they both have the form of a powerful symbol of nature, the wolf. If we look at stories of nature spirits we will often find within the same culture stories in which a single type of nature spirit appears as a wonderful ally for the people, and in other stories the same type of spirit is a horrible and dangerous monster. Much like these mirrored sets of wolves.

My interpretation of this is that it reflects the community’s relationship with the spirits. When we have good relations with nature spirits and when we respect their spaces they are wonderful allies. When we forget our bonds with them, and our relationship to their space becomes one of trespass, ingress, or destruction then they become foreboding and harmful spirits whose dangerous intentions towards us provide cautionary tales.

The wolf was one of our earliest allies, and one who is perhaps a significant contributor to our survival and development. The wolf became an ally for early humans to help us hunt and help us defend ourselves in a time that was much more dangerous for us. These wolves to whom we were allied traveled with us into our settled lives as we developed agriculture and became dogs. As we became more civilized and left the wild and the hunt, some wolves remained part of that more wild natural world. They became a symbol of the danger of the wild and those woodland spaces beyond our agrarian boundaries.

So when we consider the Spirit of the Great Wolf, who leaves gifts for those who are kind to dogs, there is definitely an element of strengthening the alliance between man and wolf. Humans who have been good to dogs and wolves will be rewarded, but so will other humans so they are reminded they have the opportunity to be kind to dogs and wolves. Kindness begets kindness. A cyclical relationship of guest and host is honored. This is a shining example of a right relationship with the spirit world.

We can also look at another example of the wolf in modern mythos who might help us consider the nature of the Spirit of the Great Wolf, and this example also provides us with a great wolf’s death:

“Akela, the great gray Lone Wolf, who led all the Pack by strength and cunning”

For anyone who grew up in cub scouts, Akela is an important foundational symbol in our youth. He is the guide who teaches us the importance of the pack and how we are to develop and learn and how to treat each other in that process.

Akela eventually leaves the pack to go on his own when the pack betrays him, but he still returns, and ultimately dies for the pack to help save the pack.

Where the contrast between Fenrir and Garm juxtaposed to Freki and Geri helps illustrate for us the relationship between men and wolves and also men and the spirits of the land, Akela helps us understand what the spirit of the wolf reflects for us. As the lone wolf, the great wolf, Akela both leads the pack and is also his own wolf. He teaches the importance of the pack but also the importance of understanding oneself and one’s own principles. He leads both by strength, and by cunning, showing that physical prowess and intellect are two hands that must work together. He illustrates self reliance but also duty to one’s community.

The form of a nature spirit sometimes reflects what their relationship is to the land, to the animals and plants there, and to the humans near the land. In my thinking if we sought to engage a local spirit in the form of a wolf, or perhaps the spirit who rules and watches over wolves and dogs, these qualities would be the qualities we would recognize in that spirit, and those qualities would be the lessons we would learn from that spirit, along with how to walk side by side and benefit each other like early men and the ancestors of our current canine companions.

So obviously, celebrate Wolfenoot with some roast meat and a full moon cake. Maybe make a donation to a charity for wolves or dogs as John Beckett recommended.

But maybe also take a moment and explore it as an opportunity for magic.

Go to a wild space and introduce yourself to the spirit of the wolves and the local nature spirits there. Not deep into the wild space, but at that liminal boundary space where the wild meets the tamed. Cut off a bit of the meat you’ve roasted and offer it to the spirits of the land. Introduce yourself and let them know you want to have a good relationship with them. Specifically call upon the spirit of the wolves and ask it to help inspire you in this relationship with both the tame and the wild parts of nature.

Don’t take anything with you.

The spirits of wild spaces should live in their wild spaces. Work to understand those spirits and your relationship with those spirits safely adjacent to their space rather than in your own space because not all spirits are spirits you need in your home.

If you enjoyed this blog follow us on Facebook. And keep an eye out for the book.
Posted by BJ Swain at 4:08 AM No comments: