My Non-Relationship with Saint Cyprian 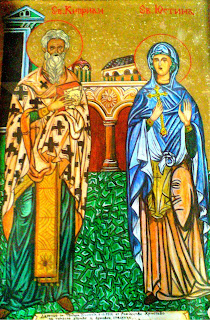 Saint Cyprian has become a hugely popular Saint amongst magicians in the last decade or so. As Catholic influence becomes more common in magic he seems to be the center of that approach for many. Like Hekate, he is a spirit who was once obscure in Anglosphere awareness of magic…despite appearing in some English works of magic…who is now everywhere. To me, he seems to clearly be a spirit on a mission, a spirit spreading the awareness of himself. To me this suggests there is something important in exploring magic related to him.

Despite feeling there may be some important magic to explore in building a relationship with this Saint, I sometimes feel like maybe it isn’t on the table for me.

I tried once with formal prayers and rituals during the Days of the Cyprians and got nothing. Nada. No presence, no message, no visions, no dreams. I felt a bit put off from it and figured Cyprian wasn’t for me. Time passed and eventually an essay by Jake Stratton-Kent inspired me. I felt more drawn to the Saint. I felt excited. I tried gathering some stuff. Lot’s of stuff. But this time the failure was on my end, time never felt right to use it, I wasn’t sure how I wanted to use it, so I didn’t.

Finally, I got a nibble. I decided to try a novena again during the Days of the Cyprians. I searched for prayers, and then remembered another time I had trouble connecting with a spirit, and the spirit led me to be less formal and be more personal. To approach as one living being to another, actually reaching out with feeling rather than just rote form. I prayed from my heart, opened myself to receive him in dreams instead of searching for presence and signs. I had some dreams, my sleep was not adequately sleep – having been taken up by this communication. Still, it didn’t really build up to a connection or take me anywhere. It didn’t lead me to where I should go next with it.

I tried again this year, and more or less, got nothing. I had a single dream, which gave me some interesting thoughts I still have to unfold. The rest of the nights, nothing. Sometimes a feeling of maybe having had some interaction, but no memory, no lesson, no message.

I feel like there is something to explore with Cyprian. But I also feel like maybe Cyprian doesn’t feel drawn to explore anything with me.

This is an important lesson to learn. Magic is about what’s real. It’s not about our whims or our satisfaction. In a world where things are real and where we aren’t the only identity that matters, sometimes the powers that exist out there won’t pick up the ball and play just because we toss it in their direction.

Even if they don’t pick up the ball, if we feel like there is something there that we are drawn to, we have to look at ourselves and see if it makes sense to really jump in and try and make it happen. If we’re drawn to something there and the spirit is just not drawn to us, then maybe we need to figure out where we find what we’re looking for. Do we find it in some better way of trying to approach that spirit? Do we find it in some other spirit of a similar nature?

It will depend in part on our own nature and needs, but also in part of that of the spirit as well. And that’s really the crux of it. Like us, these spirits are living things. Things won’t always be exactly what we want or expect, and that’s ok. We should encounter moments like this. From them we should figure out what we really need, and how to get it. Sometimes that is a better or different effort with the same spirit. Sometimes it’s moving on to something more right for us, sometimes it’s finding the right time. Reflection, divination, and searching for help and insight from our close spirit relationships can help us sort these things out. That’s what we have to do, sort those things out and see the reality that sometimes doors we knock on aren’t ready to open, or aren’t ready to open for us. This isn’t a reason to stop, it’s a reason to plan for the next time.