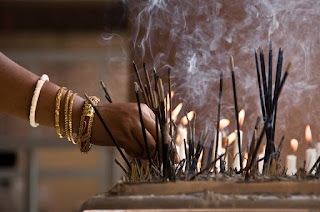 Sometimes magic and our relationships with spirits need to be touched through simple things. These simple things should not only be those that we are weaving into the regular occurrences of our lives but rather things in which we find the magical in our lives. I’m not going to write about all such spaces in which we can do this but just give an example or two.
Sometimes we can do things as simple as walking around outside and talking with the elements of nature and the spirits thereof. This not only reminds us that the living magical nature of the world around us does not only exist when we do magic – it is something which surrounds us at all time; but it also reminds those spirits we know them and they know us and we have bonds with them.
Similarly, if you have some touch point for your ancestors or household spirits or gods near the entry to your home, speak to them when you come or when you go or both. Again, they’re not only there when you do magic, they watch over you always and are part of your family and your household. In my own practice, I have a picture of my father, which my grandfather had made for me after his death, that hangs on the wall immediately upon entry to my home. I great the picture every time I return home from going anywhere. My ancestor altar is also in the walkway as I enter my home, and so I greet my ancestors whenever I return home. With this greeting I thank my father, my ancestors, and my gods, angels and other allies for all help they have given me in recent times.
Sacrifice crowns the title of this piece and so I should perhaps reference sacrifice. We often think of sacrifices as big things, or things where we give up something close to us. This is not always the case. It’s just to separate something out, to make it sacred, and give it over to the gods or spirits which aid us. It’s a moment where we can give a gift, and we can show respect, and when it is woven into our lives it becomes a moment where they participate with us in life. It’s a moment where we turn our thoughts to them outside of more formal ceremony.
So, I have two examples to give, which are really essentially the same thing. In many cultures fat and bone were the objects of sacrifice. Meat was for mankind, but the glistening fat and the rich smoke that rose therefrom was desired by the gods. When cooking we often have meats with much extra fat. Whenever I cook chicken, sometimes when I cook beef, there is fat to be cut off. I imagine this would be the case with pork and mutton, but I don’t cook those. When I’ve cut the extra fat away, I take out outside and burn it as an offering. I usually make a prayer like this, “May the smoke of the fat rise and please the gods, may the ash fall upon the earth and please the gods of the underworld and the dead. May they be pleased with this and be pleased with me and pour their blessings upon me.” When cooking ground beef, the fat which cooks off into grease I’ll generally drain off and let cool. Then I go to a spot that receives offerings pour out this fat, with the prayer “May the fat of the animal become the fat of the land, may the spirits of nature, the gods of the underworld and the dead receive its richness, and may they likewise pour their richness upon me.”
Simple, right? Not everything needs to be complicated. We can find simple options. I like this because it’s part of something as normal as preparing a meal. It’s part of an essential daily activity, so it brings our spiritual life into those daily activities. It also allows us to make meaningful something that we might otherwise cast off. There are a lot of other things you can do with fat, if you prepare other foods, or compost or whatever other useful thing, this specific act may not be for you, but the idea is there. Find small things that tie your spiritual life to your daily life.

If you would like to explore more of my ideas on magic please check out my book Living Spirits: A Guide to Magic in a World of Spirits, and keep an eye on this space for information on my new book, Luminarium: A Grimoire of Cunning Conjuration, which will be coming out soon.

Some Thoughts on Witch Power 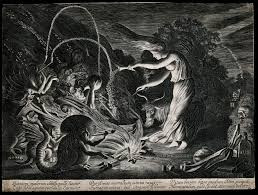 “outside the bounds of modern Neo-Paganism, witchcraft is NOT about Goddess or God, seasonal celebrations, procuring a good harvest, reliving the past, dancing in a cloak while drinking wine or wearing flowers in your hair or even necessarily about being Pagan. Witchcraft is about sovereignty.”

If you have enjoyed this post, and if you want to make sure to catch the follow up, then follow us on Facebook. Please consider sharing the post as well so your friends can enjoy!
If you would like to explore more of my ideas on magic please check out my book Living Spirits, and keep an eye on this space for information on my new book which will be coming out soon.

Rapheal Versus Michael: Battle for the Crown of the Sun 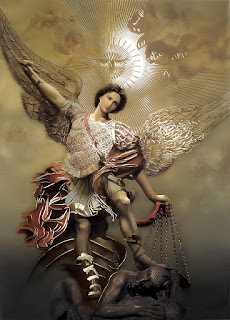 If you enjoyed this follow us on Facebook. Check out our book Living Spirits. Our new book is not out yet, but it will be in a week or two so again, follow us on Facebook if you want a book which teaches you a fast easy approach to powerful conjurations based in ancient methods with a contemporary view. 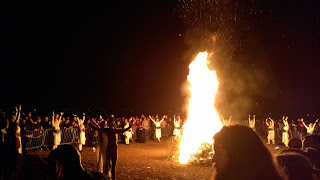 Short answer, it doesn’t. It doesn’t look like anything. It’s not a thing.

I was in a Christian Witches’ Forum on Facebook and a newbie witch was talking about prepping for Bealtain, and I asked what a Christian Witch Bealtain looks like. The answers were basically, whatever you want, it’s all about intent. The forum is mostly people doing Eclectic Wicca from a Christian perspective.
Christian, particularly Catholic, witchcraft is a solid thing. Historically we have centuries of Catholics practicing witchcraft, we only have about seventy years of NeoPagans practicing witchcraft. So when NeoPagans try to say Christians and Catholics can’t be witches there really isn’t a leg to stand on.
What is more reasonable is pointing out that Christianity isn’t Paganism and Christian Wicca and things like that don’t smoothly exist as a single thing. Catholics have frequently engaged in double-faith, in which you might go into the woods, or to a clearing, or to your house on a Saturday and engage in Pagan customs and then on Sunday go to Mass. But each tradition is approached separately as their own thing. Another way to do it is to accept that Catholicism is universal, so it universally encompasses all things which exist in the world. So if spirits exist, if gods exist, then they exist in a Catholic world and so there is a way to understand them and experience them from a Catholic perspective. With that being the case Catholic magic must exist. In fact, it does, all over the world and all throughout history.
So why no Catholic or Christian Bealtain? Well from a Protestant perspective, a core element of most Protestantism is stripping out those elements of religion. Nothing Pagan, nothing superstitious, no magic no idolatry. Catholicism has room for a lot more of that, but it does it in a Catholic context. It isn’t just a matter of doing a Wiccan ceremony with Mary and Jesus as the Goddess and God. There are rich spiritual traditions as part of Catholicism for engaging holy days, and these can include witchcraft or occur next to it. Bealtain isn’t a witchcraft ritual, it’s a Pagan holiday.
So what does a Catholic Bealtain look like? Well, Walpurgisnacht. A night celebrating a Saint and exploring the otherworldly and supernatural powers. A night where we recognize the same access to the spirit world that Bealtain recognizes, but with customs and practices that engage that experience from a Catholic worldview. Or Mayday, the day after Walpurgisnacht, where we celebrate the advent of spring and the crowning of the Blessed Virgin as Queen, ready to be celebrated over the course of a month dedicated to her. Maybe even May’s Eve, the traditional Wiccan celebration, which is – on some level; more a mystery tradition ceremony than a religious Pagan custom.
What if Bealtain really speaks to you though? Then do a Pagan Bealtain. Commit to it. Do it right. Even if you’re a Christian or a Catholic, take the double faith approach. Go live it up, explore the access to the dead, talk to the faeries and then ward your land from them, sew fertility into your life. Don’t water down your Bealtain and your Christianity trying to do a fluffy dime store book ritual that is half way between the two things without really being either.