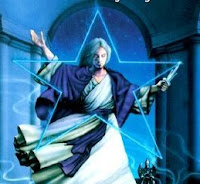 Recently I taught a class on the Lesser Banishing Ritual of the Pentagram. The class got a pretty positive response because a lot of what I went over was outside of what is normally discussed. We talk about things like the four kings, conjuring spirits, animism and the magic circle, and how to use the LRP as a practical ritual in addition to exploring it's more standard use as a mystical exercise.

In the end of the class I refer to the ritual as magical aerobics, a phrase I used to describe a lot of modern ceremonial magic in an episode of Rufus Opus's ROpocalypse.


Off the cuff some people might think that this is kind of a flippant dismissal of the Lesser Pentagram Ritual or of late 19th and early 20th century magic. It isn't. Whenever I use the term it's always in a context of talking about how even for practitioners of more traditional magic there is a utility to the developmental aspects of modern ceremonial magic or the Western Mystery Tradition as filtered through the lens the Golden Dawn and later groups. Outside of my magical life I coach a college fencing team and a youth fencing program. I'm constantly trying to convince them that it's important to keep up with running, weight lifting, and aerobic training outside of their fencing training. I don't really give a shit about getting people to do aerobics for the sake of aerobics, I have no real interest in inspiring people to run for the sake of running. I want my athletes to be successful, and developing themselves is part of that. Same for magicians.

Instructions in some books of conjuration talk about the importance of using daily conjurations outside of ritual to acquaint oneself with the ritual and to keep those magical elements of the day active even when not being used. Traditional magic works have all sorts of preparations and cleansings for the magician. Traditional systems of sorcery have initiations and preparations to empower the magician. The religious systems which inspire traditional grimoire magic use systems of sacraments to prepare and orient participants. Priests and mystics developed systems of spiritual exercises to more fully expose their adherents to the divine forces they believed they needed to experience. We see magicians pointed towards similar spiritual attainments in texts like Liber Juratus and The Sacred Magic of Abramelin.


I don't think all of these elements of magic are quite the same as spiritual or magical aerobics. But when we look at a lot of the exercises included in Golden Dawn magic and later systems, we find little daily rituals like the LBRP, Resh, instructions in pranayama and asana, the meditations given to the grades of the GD, and the rest of the small daily magical exercises that make up modern magic. Almost none of them have a direct practical result that they create, if we define practical magic as magic which creates an effect in the world. By in large these rituals have mystical elements, they open us up to spiritual forces, they change how we see and experience things, but unless they're tweaked they don't do the stuff we would traditionally associate with magic. They get us ready to be more successful at magic by building skills and acquainting us with esoteric forces.

So for those who have only tried traditional magic, there may be some useful things to find in looking at modern magic. Some of the initiations present us with access to things and experiences of things which we can apply when working with spirits. For people who only work with modern magic, that can be all well and good if you want to be a mystic using ritual, but if you want to do magic you need to step out of that box, which after all, was the purpose of the original Golden Dawn system. You went through the initiations, the exercises, and then did alchemy and worked with the handful of grimoires they had access to.
Posted by BJ Swain at 4:52 PM