Hekate and the Holy Guardian Angel...How do the relate? 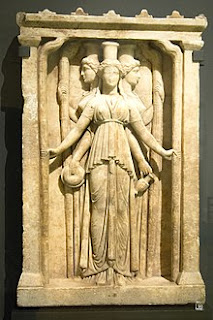 Recently, my friends Rufus Opus and Jason Miller got together with me on Zoom and we talked about our experiences with the Holy Guardian Angel. Podcaster Aequus Nox had started a thread about the Holy Guardian Angel last year on her wall, the thread had a MASSIVE response, and I honestly dislike weighing in when threads are too big, so I commented off thread. My post led to another thread in which it was suggested that Jason and I do a sort of panel discussion on the HGA. Since Rufus went the non-Abramelin route I figured his perspective would be a good one to include...Facebook memories reminded me of the thread and that resulted in the discussion finally happening a few weeks ago. You can now see it here on YouTube.

One question stood out as pretty different from the others. It was a question I had been asked before. It is one of those questions where it could have a pretty simple answer, "There's no real relationship, so there isn't much to say." Or it could have a significantly more complex answer when taken as a question about one's over all practice. We didn't address it in the panel, so I'm going to talk about it a little bit here.

The question in question...What is the relationship between the Holy Guardian Angel and Hekate? That was how it was originally put to me, Jove was included when it was asked in this context.

So yeah, most basic answer, they are from different spiritual models so there isn't much relationship. If we consider the Holy Guardian Angel in a NeoPlatonic context, the angel is a daimon, but not one which is an echo of or representative of some particular god. So, the angel doesn't specifically relate to any particular god, but may partake of influences from several gods in so far as they relate to the birth of the particular individual. The daimon could also be viewed as an aid in understanding the gods and interacting with them very much in the same vein as the Guardian Angel teaches and guides the individual on their path with God in Catholicism.

The Guardian Angel is an angel, but it's a special angel, one connected uniquely to you. As an angel it functions in a different way and resides in a somewhat different space with different natures and capacities from a god. A simple way to consider it is it's smaller and specialized to you.

None of that is especially useful. As magicians asking a question like this we want to know how these relationships work practically. The relationship between the spirits innately based on their nature can inform how we interact and work with them. Understanding how they relate in our individual practice will be more useful and more interesting. This can also vary from person to person.

For me, Hekate kind of touches most everything. She is expansive and far reaching and rules in all areas of creation. You could approach Hekate as a teacher of magic. You could approach Hekate as a gatekeeper. You could approach her as a patron of witchcraft. There are so many different specific options. For me, I consider that she controls the paths by which things manifest and by which spirits come to us. She controls the locks which open and close doors for options to manifest and for spirits to enter and depart. She controls the crossroads at which possibilities intersect and which occur in the spaces where our experience and the experiences of the spirit world and magical awareness intersect.

The Guardian Angel is kind of like a magical wingman with a bit of Jiminy Cricket thrown in. The angel can help retrieve spirits for you. The angel can help with commanding and controlling spirits when needed. The angel can introduce you to other spirits. It can give you guidance. It can make communication clearer and easier.

When I wrote Living Spirits: A Guide to Magic in a World of Spirits, I talked about Hekate and the Holy Guardian Angel both in terms of intermediary spirits. Both of them can help you with engaging other spirits and working with other spirits. Each does it in different ways. For me, it isn't so much would you work with Hekate or would you work with the Holy Guardian Angel, so much as how does each fit into your practice.

The Angel is someone who is generally with me when I'm doing work even if I'm not directly engaging my angel. My angel can chime in with advice or inspiration. The relationship is often interactive outside of a ritual context. In a ritual context it might be that my angel is referenced or called upon specifically, or asked to perform a particular function. I might ask my angel to help bring a spirit, or to help me see or communicate. Outside of ritual I might ask my angel for guidance or simply to help accomplish something I need.

Hekate is someone who is more visibly present on a consistent basis in my ritual work. She is relatively consistently present in my awareness of magical and spiritual realities and in my feelings of respect and devotion. But, at least so far, my relationship with Hekate is not as directly interactive. I can feel her presence and influence when I work, and sometimes at other times. I don't tend to call upon her or ritually work with her as the direct object of the ritual or to directly communicate. Though some things might be changing in that regard for me. She is someone I call upon in most work I do to help me with access to spirits and the places in which spirits reside. She is present as the power that binds together magic and therefore to some degree binds together and underwrites the universe itself.

If I were answering this question about the Angel and some other god, my answer would be pretty different. Hekate for me is simultaneously the Bright-Shining Goddess who befriended the grieving Demeter, she is the goddess who taught Medea and Circe and all other witches whose blood carries in it the power of Helios, she is the Cosmic Force which organizes the universe in the Chaldean Oracles - and which seems to echo the Egyptian Heka even if there is no historical connection between them; she is the multifaceted splendedly dark and brilliantly shining goddess who has encompasses and syncretized to herself all other goddesses as she appears in the Greek Magical Papyri, and she is the divine feminine which we see in she herself, in the Blessed Virgin Mary, in Persephone, in Sophia and many other forms. So far reaching a being as to encompass all of these natures and functions in a single person is beyond the limited way in which we often look at individual spiritual beings.

She is not the only god who is so ever present and far ranging for me. But she's the one most visibly active in magic. Other gods who feel and seem more specific and defined are no less in my view despite the cosmic magnificence that my description of her should imply. Each is vast in their own way. But Hekate's nature is itself vastness.