The Eclipse Wars: Magic vs Fantasies vs Fed Up Folks 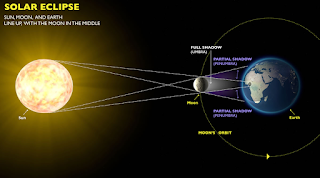 For the last few years, it was common every time eclipses would happen for two types of posts to dominate the internet.

One set would talk about the amazing power to spiritual growth and manifesting your desires which the eclipse would unleash. Cause, things are about to get real, and the alignments are happening and get ready to download all the goodness from the universe...you know...that kind of thing.

The others would be like "don't do any magic anywhere close to an eclipse ever under any circumstances."

One has more value than the other, neither is really right.

There has been a swing towards "stop commenting on eclipses, just let people do their magic" or "stop the doom and gloom different traditions believe different things."

This...is also kind of a problem. It kind of ignores that magic stuff is magic because the magic involved is real. If there is a reason for the warning, trashing the warning isn't the right answer, just like a full scale ban on eclipse magic isn't the answer.

Let's unpack this idea a bit.

One is that most people's familiarity with astrology is modern astrology. Modern astrology is basically a New Age version of a Myers Briggs test. It's pretty changeable and idiosyncratic. It presents fairly simple breakdowns of personalities and behaviors and trends such that the complex array of behaviors and feelings which make up a person will often line up in some way which makes a fair number of modern astrology memes and claims seem real enough. They are also tenuous enough that they seem like a fun thing to talk about but not something super meaningful.

The other reason is that a lot of people approaching magic from the "we're about to download all of the universe's blessings" side of things look at magic as just being about feelings and intentions. Magic doesn't really need to do anything or accomplish anything, but if it does, great. Magic is about praying, or focusing, and helping prepare yourself to find and utilize the opportunities for success that the universe presents you. Your intentions are more important than the specifics of what you do or when you do it.

The various forms of traditional astrology (Classical, Medieval [Traditional], and Renaissance) all deal with much more specific analysis to create fairly specific readings about events, moments, trends and cycles. It's used to answer specific questions, sometimes as detailed as where to find lost things, and it is used to choose moments at which to do things - reliably enough that major companies and world leaders often still use it.

We could still dismiss it as "this is just one set of beliefs," except that traditional forms of astrology go back to Babylon, and then developed through Egyptian, Greek, Roman, Byzantine, Indian, and Arabic cultures before reaching medieval Europe. We have literally thousands of years worth of data and analysis from astrologers for examining and testing their ideas.

Traditional astrology is a science based on the way it uses and analyzes data. It doesn't claim the stars are causal or to fully explain why there is a relationship between the sky and events. But it maps how the sky works as a clock which can tell us about events. It can track to people's lives as well as to larger occurrences in society.

If you look at reports from Austin Coppock he will routinely lay out centuries worth of history that provides examples of events that happened under similar astrological conditions. It's really not all that far off from meteorology in terms of its quality as a science, and it has a larger data set than most things people recognize as science.

So the problem with dismissing the warnings or holding a view in opposition to them is, you're basically the guy on youtube who did his own research.

That said, the warning to do no magic is still bullshit. Not because astrology isn't true or because magic is all fairy dust and wishes.

Eclipses denote periods of upheaval, conflict, and chaos. They are historically understood as a powerful time for signaling negative events and catastrophes.

Magic, is often about deciding how you want the world to be despite how the world is. So the fact that an eclipse might indicate stronger energies of conflicts or chaos doesn't mean everything that will occur in life is conflicts and chaos. There are other factors happening in the sky, and also other factors happening in the world. The eclipse is one factor. Magic is also about picking the powers and forces you want to be active in a situation and directing or strengthening those while keeping out others. So if you don't want eclipse energy in your life, do magic about it.

The "don't do eclipse magic" movement was really kind of a knee jerk reaction to the "I'm going to get so many blessings when I drink my eclipse moon water" internet culture. It was kind of like "defund the police" where most people mean restructure funding to appropriate auxiliary departments and services to handle things police shouldn't handle and mitigate causes of crime while no longer allowing police to amass military arsenals. It was easier to say "defund the police," but the problem was people thought it meant "don't pay cops and shut down all police departments."

See, in astrology, there are two ways in which the moment of the eclipse might impact you. One is just electing to do a given thing in a given moment. Some times are better for starting certain endeavors and some aren't. Some moments might actively hinder what you're doing. It might not be impossible to be successful, but you're not giving yourself the best possible start if you don't pick a good moment, and you might be fighting an uphill battle if you pick the wrong moment.

The other end of it is using astrological powers in magic. You might make a petition or a talisman to utilize the given powers of astrological movements and relationships which make up a particular point in time. Some moments will allow you to make powerful objects or imbue spirits into materials which you can then work with later on and have the benefits of the strength those astrological powers had at the time your object was made.

In some sense, since we live in the sub-lunar realm, and the moon reflects the rest of the powers of the heavens into our world, all astrological powers will reflect through the Moon which will impart the character of the eclipse onto other powers involved to some degree. So any magic drawing on the planets or stars might not be advisable.

Magic involving gods, spirits, ancestors, planets, faeries, nature spirits, elementals...all of that is still business as usual. Unless they have some eclipse issue of their own.

So basically, if you want to create conflict or upheaval, then YES, totally do magic during the eclipse and invoke the powers of the eclipse to do so. Pick an eclipse where the sun or moon are in some aspect with a malefic planet or where the skies have some other chaos that you want. I imagine there is an argument that if you're doing this to make a talisman you might end up with a weak talisman rather than a powerful talisman for the forces of chaos and destruction...but, you can do magic where you call upon the powers of the stars and planets with out making astrologically elected talismans.

If you want to do positive things, or empower the status quo in your life, or anything not related to the eclipse, yes, you can totally do that. It might even be a good idea to do magic if you're worried that somehow the specifics of the astrological moment of the eclipse portend disaster for your particular circumstances. That's totally what magical intervention is for. In that case though, do magic that doesn't involve the eclipse or the Sun or Moon. Work with different powers and unrelated materials.

Now some of you might still be saying "well, that just isn't my tradition, so I don't have to worry about it."

Again, it's not really a question of tradition. It's thousands of years of observed and analyzed date. But ok. Maybe it's not your tradition.

Then what is your tradition?

If your tradition uses magic developed in the Post-Golden Dawn magical revival then it kind of is the basis for your tradition. So if you're involved in any sort of Wicca or NeoPagan witchcraft, any form of ceremonial magic or chaos magic, then yes, your tradition is based on systems influenced by these ideas and the cultural views which shaped them.

Even Ar Draoicht Fein, a pan-Indo-European Druid organization which doesn't teach much magic, holds that you need to observe the cycles of the moon in timing your magic. It draws this not from druid tradition, but from NeoPaganism which is pulling it from the Solomonic grimoires which influenced Wicca.

Most reconstructionist traditions have limited access to the magics of the cultures being reconstructed. The places where we have the richest information on historical magic were the and Levantine cultures. These were all cultures which participated in the forms of astrology which developed into Traditional Astrology, and as such these were cultures which had this view point.

So, if you're doing magic, it probably is somewhere in the DNA of your tradition.

There is something to letting people get their fingers burned. It's shitty not to give them the info needed to avoid burns or help them do something useful while minimizing burns and maximizing learning.

Best Answer: Eclipses impact certain powers negatively so don't do magic utilizing those powers unless you want that kind of influence, do magic using other means.

Ok Answer: There are different approaches to magic, let people do their own thing.

Over-Reaction Answer: Never do any magic of any kind anywhere near an eclipse ever.

Wrong Answer: The eclipse is going to open an energy portal to your dreams and all your wishes will come true if you just claim them.

If you want to understand this astrology stuff check out Hawk Astrology, Austin Coppock, The Astrology Podcast, RenaissanceAstrology, Nina Gryphon, and Stellar Sorcery.