Ouija Boards, Creepypasta, and the Nothing 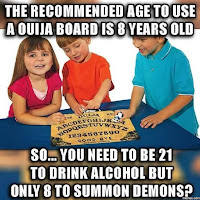 Last week was a period of silence for my blog, because I was busy watching the Olympics. Not really, the Olympics were exciting, my two favorite sabre fencers in the world went head to head in the Gold Medal Round for men's individual sabre, and I got to watch it with a former Olympian. But that didn't take up all my writing time. I was busy running a pair of fencing summer camps, so after 14 or 15 hour days, and then going out shopping for supplies for hours around midnight, well, I didn't have the energy or time to blog, and I didn't want to phone in some crappy posts. But now we're back.

Normally I don't have a lot of reason to cross my fencing life into the stuff I write about in the blog. But the round the clock immersion did lead to a moment of cross over. One of the last days of camp two girls, about thirteen, came up and asked if they could use some wall space, I could see on one of their phones that she had up a page that said “How to Summon Creepypastas.” She made a bit of a comment about trying what the web page said, and I cut in with “hey, I don't think you girls should be messing with that.” She and her friend tried to persist, a third girl turned and ran calling back to them that she wanted nothing to do with it. It was a little amusing. It was also a little odd realizing that I was telling them “hey, don't go do magic” and leaving it at that. It wouldn't have been right to have a more in depth conversation about it. On the other hand, these are internet fantasies. I turned to my assistant coach, who knows I'm a magician, and said “What is with all this creepypasta stuff? We have monsters and spirits which have been around for thousands of years why do people need to invent new things, why can't kids conjure real spirits?” He pointed out that a lot of them overlap with traditional folklore. I hadn't looked at any of them in depth. In my mind “creepy pasta” is when I forget to throw away left over spaghetti and it gets moldy and grows legs in the fridge. Looking over some of the summoning instructions some of them do remind me of existing folklore, which could be an interesting thing to look at. But the word “creepypasta” is too cute and makes me imagine cartoon yokai.
So why would kids who don't do magic want to summon these creepypasta creatures? In Bruce Coville's Book of Monsters he talked about people telling scary stories because we need to inoculate ourselves against the fear of danger and death. We can't put ourselves in actually dangerous situations, so we have to expose ourselves to things which can frighten us without exposing ourselves to harm. This seems to be a basic human need. Coville mentions roller coasters as another example of this. There are lots of things in life like this, and the telling of scary stories is a pretty ubiquitous amongst humans. Sometimes they help inform us about things in life to be careful about, sometimes they convey knowledge about esoteric powers, sometimes, maybe they are just stories. So, if there is a human need to be afraid, in a safe context, maybe it's good that we've got these new stories and kids are into them and they're getting to be safely afraid.

But what about when kids decide to murder other kids to conjure Slenderman? The idea of creating new stories is great. The idea of stepping up to the edge of terror and coming close to conjuring something dangerous and deadly and mysterious but not quite doing it...I think that should probably be part of every kid's childhood at some point. When I was a kid, you always stopped short of saying Bloody Mary or of saying Candyman, you didn't even quite know which cemetery to go sleep at to conjure Black Aggie, you just knew you slept at the cemetery with her statue. Kids today seem more intense with this, even the ones not looking to stab their friends to death, there is a fear, but also a certain glee about these creatures. Maybe it's the friendly categorization of Creepypasta. It kind of reminds me of another thing that's been popping up lately. That silly meme about the appropriate age for Ouija boards. “The recommended age for a Ouija board is 8, so you have to be 21 to drink but 8 is old enough to conjure demons?”

Kids don't step up to a line with a Ouija board. They gleefully giggle about talking to unknown spirits, the dead, and whatever happens to answer. This isn't a new thing with kids today. It's treated as a kid appropriate game. So it feels safe and fun. But, if you go with the idea of reaching out and calling to whatever, and letting it get channeled through you, then Ouija is kind of the occult equivalent of having unprotected sex in a cheap whore house. As a tool, used correctly, it can be fine. Probably not a kid's toy, but otherwise a valid tool of magic.

So with Ouija and Slenderman being the options, should we maybe keep kids away from magic? Or only give them white lighter Wicca? Convince them to forget the world beneath the glass and focus on the day to day as if there is nothing else until they're older. That always works out for the best, after all, just remember the words of G'Mork:

G'mork: Fantasia has no boundaries.
[laughs]
Atreyu: That's not true! You're lying.
G'mork: Foolish boy. Don't you know anything about Fantasia? It's the world of human fantasy. Every part, every creature of it, is a piece of the dreams and hopes of mankind. Therefore, it has no boundaries.
Atreyu: But why is Fantasia dying, then?
G'mork: Because people have begun to lose their hopes and forget their dreams. So the Nothing grows stronger.
Atreyu: What is the Nothing?
G'mork: It's the emptiness that's left. It's like a despair, destroying this world. And I have been trying to help it.
Atreyu: But why?
G'mork: Because people who have no hopes are easy to control; and whoever has the control... has the power!
Atreyu: Who are you, really?
G'mork: I am the servant of the power behind the Nothing.

I think Richard Dawkins might be the power behind the Nothing, since he thinks fairy tales are dangerous.

There is value in children being aware of the power and mystery of the Other. Children raised to avoid the hidden things in the world teach themselves to rationalize away things they see and experience. They condition themselves not to dream that their dreams could be real, not to empower themselves through the ephemeral currents of reality. Maybe children don't need to reach deep into the darkness, but they should know it's there, they should know what kind of power it holds, and they should know places they can reach for power. They should feel comfortable knowing that other people understand the things they see and that sometimes there is a reality to them, and how to see what is real and what isn't.

So these particular tales of creatures and monsters might not be what kids need, but maybe there is still something we should look at with them. Jason Miller recently wrote a post which talked about Black Aggie myths and how they pop up a variety of placed. A friend and I were looking at tales related to different states and noted that Cry Baby Bridge shows up all over the country. Even though in both of these tales there is a physical location tied to it and a history of phenomena tied to that physical location. Maybe these stories show up in different places not because of the history of the places, but because there are spirits which are drawn to particular types of places and do particular sorts of things. Maybe these spirits inspire stories to remind people to engage them so they still have agency and power to operate in the world. A lot of these stories come down to similar patterns, themes, and instructions for working with the spirits. So maybe folk tales and urban legends don't have similarities because they diverge and get retold and morph as people move around from community to community, maybe there are spirits who pop up from time to time and place to place and get people riled up, make people tell stories, make people remember them.

Clive Barker's Candyman actually deals with this idea pretty well. The importance of memory and awareness for spirits, the importance of spirits acting in the world to make sure people tell their stories. All of this is reflected in the reformation of these sorts of tales every few generations. This is pretty evident when we look at similarities of urban legends, folk stories, and mysterious fortean tales, and even some unexplained phenomena. This explains the glee and fervor with which people are drawn to believing a new generation of tales, and playing with the possibility of their reality, trying to draw fear and danger into their lives by saying a few names or drawing a few symbols. These sorts of spirits don't seem to be like the spirits we see in the spirit catalogues but more like the spirits of places, local spirits, ghosts and shades, that we see in old stories.

There could be power in identifying such spirits and how to work with them in more complete ways than creating chills and thrills around a campfire. Or maybe not, who knows. I'd be curious to hear about experiments.

We will be ramping up for a lot of cool posts next week so please like our page on FB Glory of the Stars on Facebook
Posted by BJ Swain at 11:25 AM