Hekate’s Deipnon and the Restless Dead 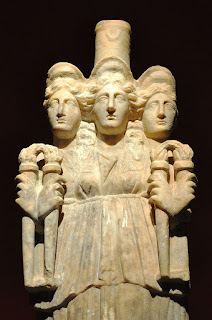 Ok, so…imagine…you’re dead. But you’re not just dead, you’re dead and people didn’t show up at your funeral, no one mourned you properly, and you’re feeling a little bummed because the last party the earth would see in your honor didn’t honor you. Or worse, imagine you died years before your time and you get to the other side and realize it’s not time for the ferryman to pick you up yet and you’re stuck for a few years. Maybe you’re dead and someone murdered you and no one has found the killer, or they don’t even realize you were murdered. Perhaps you died with an important project you were working on, which no one else is going to do quite as well as you, and finishing it would have made the lives of those you cared about a lot better.

I’m pretty sure, you would be disquieted in any of those scenarios. No one wants to die and feel tugged back by loose ends. I’m sure all of us have moments where we think about our own deaths and those moments are often quickly followed by thoughts of things we’d leave behind – which could be stress for our loved ones, unfinished work, or unticked bucket list line items. We know we don’t want to die while those thoughts are plaguing us. We want a good clean death when everything is tied up, at least well enough for us to feel like we can let go and go to the next thing.

A lot of people don’t get that kind of death.

Depending on what the situation is, maybe their funeral rites are enough to soothe them and guide them to the next thing. Maybe they’re able to deal with some of it before hand so they can let go as they go. Maybe people pray for them and elevate them enough after death that they’re able to get passed it all.

But maybe they don’t get that kind of help. Or maybe the scenario is so bad that without skilled intervention no typical modern response to death will fix it.

Most traditional cultures recognize that there are those who move on to the afterlife, and also those others who don’t. It could be because they led a crappy life, or because their death was a bad death or their funerary rites weren’t observed correctly, or they died too early. Different cultures have different ideas of what creates these ghosts, but these causes we have mentioned pop up frequently.

The restless dead can be dangerous. They’re spirits who are unhappy, or agitated, or unsettled. They might be angry, they might be jealous, they might be in discomfort and so they might be harmful to the living, even to the magician. Most cultures and magical systems that work with the dead have means by which they are utilized or worked with by magicians, because even with this danger, if managed correctly, they can be powerful and useful spirits. Like our ancestors, they have ties to the world, they understand the world, and they understand humans. They are still close to our manifest reality and so when given further connection to it they can be powerful at connecting to it and they can understand things within it. But, it should still be remembered that they are unbalanced and agitated spirits so their perceptions and their actions will not necessarily be as beneficial or reasonable as the ancestors. Unlike the ancestors they don’t have “skin in the game” as far as you’re concerned. They want rest and relief, they want acknowledgement, they’re not looking out for you because they care about you. If they’re working with you it’s because they are bound to do so or because they believe you will help give them what they need.

So how do we give them what they need and how do we make inroads for working with them?

Many spells that pop up in the magic of the western world involve using restless spirits to harass or torment someone. Sometimes it's as a punishment, or with the intent to harm them in some way. Other times it is to get the person to do what the magician wants. Frequently in this latter case this is part of a love spell, in which the target is vexed and tormented progressively until they give themselves over to the one the spell intends for them to love. This model shows up though in many forms of using spirits to force someone to obey the desire of the magician, not just in love spells. These spirits are also called on for information, to reveal secrets and hidden things, to provide information about things they knew in life or have discovered in death, or to find and facilitate communication with other spirits.

Frequently they are approached with some model which feeds them or offers some sacrifice or source of nourishment for them. There might be something to cool them and make them receptive to interaction. Often there is an agreement that for providing the service the magician needs the magician will perform the needed rites to give the spirit release, or perhaps do some task the spirit needs accomplished, or that the magician will take care of the spirit while they are working together.

This type of interaction is not the idea behind Hekate’s Deipnon, and may not be a traditional way of working around it, but it does certainly have points which overlap that can help bring them together in a modern practice.

Hekate is Queen of many things. One of them is the dead. Not just the restless dead but the dead in general. The restless dead have a special relationship with her though. They do not reside in the underworld but rather roam unseen in this world. At the Deipnon, when the moon is gone and the night is dark, the restless dead come together and are lead by Hekate.

During this time when the dead were brought together people would offer a meal for Hekate and the restless dead. This meal gave them the acknowledgement and recognition they needed but also served as offerings to nourish them and comfort them.

The meal often consisted of  raw eggs, some type of small cake, garlic, leeks or onions, and fish. Bread and honey might be included too.

By feeding the dead, people held them off. If the dead owed some anger to your household, this helped alleviate it. Providing these gifts at the boundary of your property kept the dead and Hekate from needing to come deeper into your household.

With this idea of tying up loose ends and correcting relationships some interpret Deipnon as a time to reset things. To clean out things from the old month, to pay debts, to resolve wrongs. Deipnon was the last day of the month, and so it was a time to enter the month fresh and unburdened. With this old sacrifices and offerings might be added to the Deipnon meal as part of the offering.

So at Deipnon the restless dead are gathered, we get ourselves and our houses in order, and we help soothe the dead, we help feed them, we help maintain a good relationship with them so they are not inclined to bother us.

Can we take this a step further though? Can it be more than an apotropaic house cleaning?

Deipnon is a monthly holiday for the restless dead, a time to give them rest and relieve some of their disquiet. It is probably not the day to conjure them and try and make them work for you, or even to enter into an alliance and strike up a trade with them. Let them have their day.

It is a time to make a connection though, albeit an indirect and loose one.

When the offering is made, you just walk to the spot where it will be left, leave it, and walk away without looking back. You don’t want to directly encounter the dead on this night. You don’t stand there making prayers, chanting hymns, striking deals or whatever else.

That doesn’t mean you can’t do more work before, and less direct work after.

You can bless the meal. You can say prayers to Hekate, light candles and incense as offerings, and let her know your intentions and goals and ask for her to help you work with the dead when you seek to during the coming new lunar month. You can ask that your offering help soothe and cool them such that they will be able to work with you, or such that you will be able to approach them. You can add items like a libation of water to cool them, or honey or wine to give them happiness, milk to soothe them.

After you set the meal you can return to your home, if you have an altar or shrine for your ancestors, or for your local cemetery spirits, or for wardens of the dead, go there and make offerings to those spirits with whom you work. Ask that they aid in your efforts to connect with the dead who are walking by that night when you attempt to in the near future. Offer prayers for your own dead and for the restless dead.

Let your work show the dead who travel that night that you will be a good ally for them. Then when you are ready look to Hekate and to the spirits with whom you prayed and ask them to help you call upon a restless spirit so you can make an agreement with it.

For those looking to try this, my book, Living Spirits: A Guide to Magic in a World of Spirits, has not just a lengthy chapter on Hekate, as well as a chapter on The Dead, which provides an example of an old working for conjuring a restless spirit, but there is also a section on Deipnon which includes a pre-Deipnon ritual which I will present here. Following that ritual is a ritual based on a 1st century Roman retelling of an earlier Greek story which describes in detail a necromantic rite involving Hekate. This has been rebuilt in the book into a ritual which calls upon Hekate so the magician can receive a familiar spirit from amongst those restless dead in Hekate’s train. If you’re interested in this kind of work check it out.

Here is the pre-Deipnon preparation ritual from the book:

Infernal, and earthy, and supernal Bombo come!
Saint of streets, and brilliant one, that strays by night,
Foe of radiance but friend and mate of gloom,
In howl of dogs rejoicing and in crimson gore,
Wading amid corpses through tombs of lifeless dust,
Panting for blood with fear convulsing men,
Gorgo, Mormo, Mene, and of many shapes,
Come! Propitious Hekate, come to our sacrificial rites!

Then from your own heart and mind explain what you’re offering and why, explain anything you’re casting off or separating yourself from, and what relationship you want with the restless dead, if you’re praying for their peace or if you’re requesting they come for your future aid.

Let the candles and incense burn and then when the incense burns out take the meal and deliver it to its appointed spot.

If you enjoyed this, again, please order a copy of my book Living Spirits: A Guide for Magic in aWorld of Spirits.

Also, please feel free to share this blog if your friends, or your forums, or with anyone who you think might need some restless dead or Hekate on their radar. You can follow us on Facebook, and you can join in on some cool discussion of this and other topics in our Facebook Forum, Living Spirits.