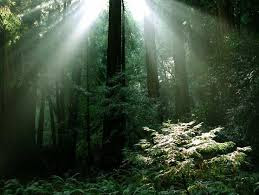 In my book, Living Spirits: A Guide to Magic in a World of Spirits, I talk about the idea of calling upon the spirits of particular sorts of plants, and stones and objects which we might use in magic. If we are incorporating honeysuckle in a spell, the divine signature which defines the honeysuckle into existence describes a particular power or nature. The radiance of the heavens which is captured as honeysuckle is defined into creation radiates with the presence of the plant. If we have a fox tooth it has a contagion link back to the fox and so it partakes of the life and power of that fox. An amethyst will reflect the radiance which drew its mineral structure into being and convey the power and nature of its signature, much like the honeysuckle.
But in any of these cases are we drawing on living power? Are we activating something which has motion and agency?
Each of these materials are tied to spiritual life we can call upon to be part of our work, to bless and empower the material we are using, and to work with us through that material. In old Jewish angelology every class of objects is ruled by an angel. Other cultures, traditions and folklores have similar views. The individual honeysuckle flower we pick may or may not have a spirit of its own, but there is a spirit which moves through the world and stirs the growth of honeysuckle, breathes life into it, and empowers its nature. Likewise for stones, or for animals. So with each of these items we might call upon that spirit.
These items might also have spirits based on their provenance, which we can recognize if we ourselves collected them. Say the honeysuckle grew in a cemetery, then we might connect to the spirits of the cemetery through the honeysuckle. If we pulled the amethyst from a stream then it might connect us to the spirits of the stream. The fox tooth might connect us to the fox, and also to the spirits of the forest where the fox lived.
In the book, in the third appendix “Southern Conjure: A Practical Guide to Spiritous Sorcery” I suggest that when making oils and powders, or when working with herbs and materials in other types of spells that we should call upon these spirits so it’s not just the presence of the item but the engagement of the spiritual powers behind the item which contribute to the spell. Here is an excerpt:

“As we’ve said, there are spirits associated with plants, rocks, and various other things occurring in nature. So when we are making a powder or oil we can call upon the spirits of our components to enliven and empower those components and to work together through the combination of our ingredients. Some ingredients might have additional spirits to call upon based on where the ingredient comes from or if it is tied to some particular spirit or profession or other association. Once we have mixed our ingredients, or if we are working with a premixed oil or powder, we can call upon a spirit or god related to the purpose or goal for which the oil or powder will be used. We can also set the container of the oil or powder on our ancestor altar, or the altar of whatever other guides or guardians we have and ask for them to bless and empower it and to work through it hand in hand with us.
So say we want to make Algiers Powder, which according to Herman Slater, is made with Vanilla, Patchouli, and Cinnamon. It’s also associated with the color purple. It’s useful for love and for gambling. To begin we might lay out a cloth of purple and on it place three dishes, one for each component. Behind each dish set a candle. You might anoint the candles in holy oil, you might sprinkle the space with holy water. Giving each herb its own respect, for each in turn, touch the herb, light the candle, and make a prayer to the spirit of the herb. Once you feel that you’ve engaged the spirits and the physical material carries their power and blessing then mix your powder.”

The text then goes on to discuss the idea of calling upon gods and spirits associated with the purpose of the mixture because the mixture becomes a thing itself once mixed. So that way we have the power of the spirits called going into the mix, and we have the direction and power of the spirits related to the goal of the mix.
Our prayer for the component could be really simple. Something like “Spirit which gives life to the vanilla bean, which spreads its growth through the world and guides its vitality and flavor, accept the offering of this candle and for its life place your life and motion in this vanilla plant, be with me and through it aid in my work.”
If we have a plant which has some heavy mythology or folklore or symbolism to it we can reference that in calling upon the spirit of that plant. For instance, “Spirit of the holy tree, whose berries are bright red, showing the brilliance of the blood of Christ, which Christened you at his crucifixion. Mighty holy tree whose bright green and red shine in the dark of winter, life defying death. Spirit of the sharp leafed tree whose leaves were hidden in spells as wings of bats, fly forth to join me. Bring life to the sprig upon my altar and through it work your magic with mine.”
If we harvested the plant or other item ourselves then we can begin this link to the spirits associated therewith at that time, while there is still a living present and vital connection in the place where that spirit has amassed into the growth of that plant or the crystallization of that stone. When harvesting we can call upon the spirit, introduce ourselves, ask to work together and to take this piece of material from them, and give them some offering at that time. Then later when working we are recalling that connection and asking for aid in a situation where we already have a relationship. If we’ve purchased the material it’s still possible to build that connection and call upon it. But if we have the opportunity to go out and harvest it definitely adds a component.
There is another method we could take though. Recently I was reading an article which quoted a spell from The Magical Papyri – PGM IV 2967 – 3006. This is a spell for harvesting a plant which goes through a series of statements associating the development, being, and treatment of the plants with several gods. The idea suggested by the article is that this is flattering the spirits associated with the plant to cajole them into aiding the magician.

“You were sown by Kronos, you were conceived by Hera, / you were maintained by Ammon, you were given birth by Isis, you were nourished by Zeus the god of rain, you were given growth by Helios and dew. You [are] the dew of all the gods, you [are] the heart of Hermes, you are the seed of the primordial gods, you are the eye / of Helios, You are the light of Selene, you are the zeal of Osiris, you are the beauty and the glory of Ouranos, you are the soul of Osiris’ daimon which revels in every place, you are the spirit of Ammon. As you have exalted Osiris, so / exalt yourself and rise just as Helios rises each day. Your size is equal to the zenith of Helios, your roots come from the depths, but your powers are in the heart of Hermes, your fibers are the bones of Mnevis, and your / flowers are the eye of Horus, your seed is Pan’s seed. I am washing you in resin as I also wash the gods even [as I do this] for my own health. You also be cleaned by prayer and give us power as Ares and Athena do. I am Hermes. I am acquiring you with Good / Fortune and Good Daimon both at a propitious hour and on a propitious day that is effective for all things.”

Another way to consider this though might be that it is building up a divine body around the spirit of the plant. In Christianity there is the concept of the armor of God, in which the prayerful associates their spiritual body with the divine armaments of God. Earlier in Egyptian magic we find the Ritual of Coming Forth by Day:

So rather than assuming that we’re cajoling the spirit of the plant by telling it how awesome and divine it is, perhaps we’re invoking the powers of these gods and the ways in which the gods connect to nature and therefore to the plant, to express their power and life through the plant. Thus the numen of the plant is imbued with the numina of the various gods, expanding its light and power beyond an earthly spirit to a vessel of divine power.

Honestly, which makes more sense for a magician, telling a spirit “Yo dude, I’m picking you because you’re so cool, all these gods raised you and shit, like you didn’t know that but it’s true, so be excited so we can do magic,” or saying “Hey, bro…I’m going to invoke about a half a dozen gods so your natural power will be super amped, you’ll feel good, and our magic together will be more awesome”?

So, what if we’re not harvesting the plant, what if we have store bought herbs?

I haven’t used this prayer yet, but to me it seems like it would work just as well in that case. You’d still be building presence of divine life anchored to the plant.  I’m curious to try it and curious to hear what others get from working with it.

Pop over to our FB group Living Spirits and talk about your experiences with conjuring living power into the materials you’re working with in your magic.

And if you’d like to read more, please order a copy of my book, Living Spirits: A Guide to Magic in aWorld of Spirits.
Posted by BJ Swain at 1:40 AM