Is Tarot Spiritual? Does Tarot Require Spirits? Am I a witch if I read Tarot? 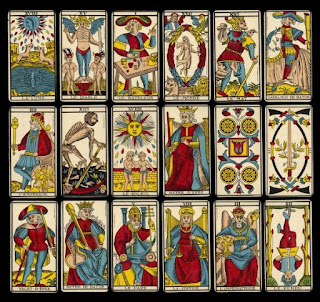 A thread in a forum today brought up a quote from a TikTok video about Tarot, which could easily kick off a larger discussion around divination and the concept of what it is to be spiritual, "Tarot does not have to be spiritual. You do not have to interact with the spirit world in order to read Tarot." The quote is by a TikTok personality who goes by Nao.

I haven't seen the video or any other of her work, so I can't speak to that. But questions about tarot and who can read tarot and what it falls into, or what the implications of reading it are come up frequently.

The first thing to address then is the idea of spirituality or being spiritual.

A lot of people think of magic as a type of spirituality. Many people look at religion as distinct from spirituality. The associations people have here are frequently messy.

Spiritual means that it relates to the human soul and isn't a materialist concern. It doesn't have to do with working with spirits. So the distinction in that tarot quote is a little messy.

Tarot, in all cases, involves faculties beyond the material world and our material experience. So tarot is always spiritual.

So the opening assertion of the quote is wrong.

It's still important to understand that things like tarot and magic don't have to be how we approach engaging the religious elements of life and they can just be tools. We don't have to define our lives around being tarot readers or doing some magic. The rules, ethics, and special seasonal events we observe don't have to relate to engaging in those practices. Because of the way "New age spirituality" and NeoPaganism kind of package together a lot of things, people sometimes think they need to be part of some bigger bundle, but they don't.

Like numerous other things, tarot, using a pendulum, astrology, or magic can fit into any broader context of spiritual activity without defining what the overall complex of spiritual behaviors in your life are. I think sometimes when we try and define our spirituality as magic or divination, or these things as our spiritual practice, it leads us to ignore how these are the practical elements of spiritual practice. These are the ways that spirituality allows us to know stuff and get stuff done. They aren't just about touching the infinite and feeling feels.

So, do Tarot and Divination need spirits?

In a certain sense, yes, they do. Divination means that we are obtaining knowledge from the divine. A lot of historical great minds in science also explored alchemy, astrology, and magic because they felt like there were limits to what physical science alone could teach them. Traditional forms of education culminated in studying philosophy, and then if you were excelling enough, theology, because things like arithmetic, geometry, logic, rhetoric, music, and the rest were the ground work for being able to understand these higher concepts. Exploring the truth of the divine world was how these academic ideas blossomed into a more full understanding of reality.

In any traditional form of divination, we are working to get knowledge from some sort of spirit or god. It might be ancestors, or spirits between our ancestors and God, or angels, or demons, or gods, or any other spirits with whom we can speak. They speak to us through the tools of divination, and hopefully through direct inspiration which is guided and interpreted through those tools.

A lot of people work with tarot or pendulums, or geomancy or throwing bones, or various forms of divination without calling on spirits to help them.

Who are they talking to?

In my understanding of things, you can use divination tools to try and read the "buzz" of the world. Essentially the harmony of energies and spiritual powers in the world and the way in which they are moving. Exploring that collective movement can tell us things about the particular forces at work in our lives, how they got to be in our lives in their current manners, what their current natures and impact on our lives are, and what direction they're trending towards.

Some folks who look at the spirit model as the only way anything works would argue that these tools still work through spirits if you're actively working with the tool, you might just not realize that's what's happening. I don't like to take that approach unless I know more about what someone is doing. I think there are ways things can work without direct engagement of spirits.

You're still engaging something spiritual when you're using divination tools. You're still communicating with a living pulsing force beyond yourself. Whether you're doing that generally through trying to read the movements of the world's life, or whether you're asking specific spirits to speak to you through the tool.

If you experiment with both, I think you'll get more grounded, clearer, more actionable information when you engage the right kinds of spirits and use your divination tools to speak with them.

If you're keeping it general and just letting the spirit of the world speak through to you, it's still spiritual, even if it maybe doesn't involve shooting the breeze with some disembodied entity.

If you're approaching tarot or other forms of divination in a way which tries to avoid spirituality...say you're laying out cards and expecting them to be fully random and they're just a guide for self reflection...then you aren't doing divination and you aren't actually reading tarot. You're looking at some pretty pictures and meditating. This might be useful, but again, not really divination.

I would also imagine, divination would still be good to do on top of this. Self-reflection is important and useful, but divination gives you information and knowledge beyond what's already in you. Taking that self-reflection and then exploring a broader perspective than your own, and using what you learn from both is going to get you much further.

...tarot, like magic, maybe doesn't always need to involve spirits but is probably better with them

...tarot, like magic, doesn't have to define your spiritual life even if you use them, so you can use them in any religious context

If you want some help exploring the vast world of spirits check out my first book – Living Spirits: A Guide to Magic in a World ofSpirits