Presenting part 4 of 8 of our series on Conjuration and Spirit magic for beginners. Today we'll talk about conjuring the elementals. Last week we posted the a series of book recommendations and information on setting up a devotional practice to develop support in the spirit world. Yesterday we introduced scrying. Today we'll look at the elementals before moving on tomorrow to intermediary and crossroads spirits. So please like us on Facebook, and share the post with your friends so that can enjoy it as well. 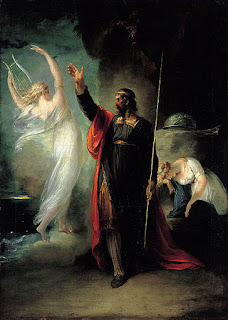 So now we get to our first phase of conjuration, the elemental spirits as defined by Paracelsus. A lot of people think of these elementals as being a part of Golden Dawn magic, or as coming from Eliphas Levi. There spirits are a big part of the GD system and post GD systems. The most common approach to their use is based on a chapter in Levi's Transcendental Magic (Ritual and Dogma of High Magic), that chapter being The Conjuration of the Four. Some people recognize that The Comte de Gablais by De Villars provides an earlier source. But in a slightly earlier and less readily available work, we will find their original description comes from Paracelsus. We don't find them in the Grimoires, but there may be similar spirits, or classes of spirits, or related spirits in the grimoires. Paracelsus as a source at least ties them into the same time and network of people collecting together the magical knowledge that informed the previous generations who produced the early medieval grimoires. Paracelsus also gave us the initial introduction to the Olympic spirits, described a generation later in the Arbatel. But honestly, where their original descriptions comes from doesn't matter so much as the fact that they are very accessible, and that they are good workers.

The elemental spirits, in my experience, and by most accounts, are relatively simple uncomplicated spirits. They are very function based in terms of ordering and carrying out the functions of their elemental realms. They don't have much of an agenda. Some agenda is implied in Comte de Gablais but I don't see any real sign of this in them aside from the fact that they seem happy to work with and help humans who work with them. Being elemental they are very physically concerned and are very much about clear real world manifestations. But the manifestations are often very simple, sometimes small, and very literal in their nature.

Two stories about work with Gnomes.

Recently I did a simple invocation of the Gnomes to help smooth out some monetary flow and deal with a handful of issues that people were bringing to me. I basically just asked for some money. The next morning I went out to my car to head to work and found a $50 dollar bill stuck in my door. I thought “what the fuck, how did that get there...oh, gnomes! Gnomes are awesome.”

A friend once told me about doing the conjuration of the Gnomes and then going out to a bar. While at the bar he was sitting there and suddenly the crowd of people parted like the red sea. A scruffy dirty man in a blue hoodie drawn over his head and sticking up to a point stood at the other end of the opening and walked up and hugged him and said “Hello Brother!” Then the creature turned and walked back into the crowd and it closed around him. A moment later the crowd opened again and the man walked up to him again and he poured coins and candy cigarettes and similar little things into my friend's hands and smiled warmly and said “here brother” and then turned and walked back into the crowd which closed around him and he was gone. My friend was convinced that this was a manifestation of the gnomes. To me it seems pretty probable.

The elementals don't really open you up to the same kind of life changing psyche shifting disruptions that often come with other spirits. They don't have a need to either fix your life (angels) or destroy order (demons) and so they're a pretty stable, easy to deal with relatively safe spirit to start with. They're still not precisely safe. Nothing in magic is exactly. It's still possible to experience an impure magnetism or obsession with a particular elemental force. It's possible to approach these forces incorrectly and create problems. It's also possible to conjure them and apply them incorrectly in ways that are destructive. If you invoke fire, be prepared to deal with fire. Crowley's Liber Librae, which is really just a Golden Dawn knowledge lecture repackaged, is essential to consider when thinking about how to approach the elementals in a balanced fashion. This balance is necessary. The balance is what the elementals are looking for when they deal with you, it's what makes them want to help you, because it helps you stand in a position where for them, you can be an ally who links them to the Lord, which is central to their call towards service.

Because of this ease of cozying up to the elementals in a relatively safe fashion they're a good place to start. When I was a Philosophus and was given to working on early experiments of conjuration, elementals, articifial elementals, and servitors were the teeth cutting entities I was pointed to for exploring that magic. For that reason, and the simplicity of working with them, they'll be the first spirits we look at.

The Conjuration of the Four by Levi will provide the basic framework you need for approaching work with the elementals. Essentially, these are the things to remember. The elementals desire to create orderly manifestation of the forces of their particular elemental worlds because this is what the Lord has dictated for them. Now the Lord here is not necessarily Jesus Christ, or God the Father, but rather the NeoPlatonic Demiurgos, the extension of the One and the Good who orders time and space into creation and diverse manifest pieces. From a Hermetic perspective we can look at this Lord like the Logos or the shining extension of the force of creation beloved by the spirits of order and creation who willingly serve that force out of their love for the beauty of the divine source. This is the perspective of the elementals. That said, the elementals don't necessarily have a clear apprehension of what order and creation are, they just do what they're told by the particular expression of the Light which is present for them. As the magician you fulfill two roles in this interaction. You invoke the Lord so that you can stand as his lieutenant or as his image for the elementals to gather around you and do service for you, and simultaneously you worship the Lord while standing in the perspective of the elementals so that they rejoice at your unity with them and they feel bonded to helping you.

What does it mean to stand with them? LITERALLY STAND WITH THEM. So if you're calling the sylphs you don't stand in the west and look east and call them from the east like you would a spirit who comes from the east typically. You stand in the east, and face the altar (now to your west) and you say the prayer of the sylphs, which is not a conjuration of them, but is rather the prayer that the sylphs utter in honor of the Lord. The sylphs gather with you for the prayer and feel bonded and aligned to you as one of them, but as one of them who is in the image of the creator and who possesses the complete soul which they do not, but which they desire to be close to. You give them joy and hope. When you say the prayer, try to feel like you're part of the community of these elemental spirits, try to feel the joy and love they feel in working for their creator. It's pretty uplifting to feel this and creates a pretty healthy and beneficial relationship with these spirits. Once you feel that community you can ask the spirits for what you want, and instruct them to go off to do their work toward that end.

It's really about that simple. I would recommend for whichever elemental you're calling you should have some material representation of their element. Incense, a candle, a bowl of water, or a crystal are simple easily obtained material representations of these particular elements. Representations of the platonic solid associated with the element, or of other spirits or powers related to the element can add to harmonizing the vibration of your space to that of the elemental. You can call the elementals in a larger magical ritual or evocation ritual so that the elemental spirits can assist with whatever magic is being done by you or by whatever other higher spirit you're calling. Or you can do a ritual simply to call the elementals and ask them for help.

Raise your hands and look upward and say:

Face east and in each quarter trace a downward pointed triangle saying as you move through the quarters:


First then the priest of fire must sprinkle the lustral water of the loud resounding sea, hear now the voice of fire.


Then when all the phantoms have vanished, you will see that holy and formless fire, that darts and flashes through the hidden depths of the universe.

Step to the quarter associated with the elemental spirits being conjured and earnestly pray the prayer appropriate to those elementals.

When you feel the presence of the elementals explain clearly what you desire and ask them to go make it occur.
Posted by BJ Swain at 10:00 AM