Yesterday's post kicked off this week's special series of posts giving an introduction to various elements of spirit magic and conjuration. This is post 2 out of 8. Please like and follow us on Facebook so that you won't miss any of the action, and please share the series so others you know can also enjoy it. 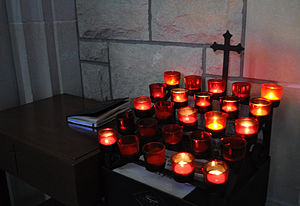 So this topic was actually one I was planning to post about on its own initially but it definitely has it's place within our discussion of beginning conjuration. I had a conversation with a friend recently about the importance of devotional work in magic. The A.'.A.'. system assigns Devotion to the work of the Philosophus and it is with this work that initial elements that could lead to spirit conjuration start to pop up. Aside from that though, devotional work with spirits and divine figures helps with conjuration work, and also, with life in general. It has a lot of elements which overlap with magical practice without necessarily being magical practice, so it can also be a good practical starting point.


So what do I mean by devotional work? Devotion, for many people, would imply some sort of religious commitment to some deity or saint. In our context it could mean this but it does not have to. All we're talking about here is creating an on going relationship with a spirit or spirits who will act as allies for you, both in life and magic. This borders on religious practice and can look like religious practice.

Some theorists on Indo-European religion talk about the guest-host principle as a basic ordering concept of the universe and society. This suggests that at times an individual may be a guest or a host, and that as a guest he must act in a certain way out of respect for his host, and the host must therefore provide him hospitality, and further in the future he will at times act as the host, and his former host is therefore deserving of being welcomed and treated well as a guest. This does not necessarily mean a literal house guest scenario, but rather, if you help your neighbor it should be expected that your neighbor will appreciate the help, and also make efforts to help you later, and that you will show the same appreciation and seek later to again help your neighbor; creating then a cycle of mutual appreciation and aid. Devotional work with spirits works much the same way.

So if it is a God or Saint that you select, you are not necessarily selecting them as an object of worship. You're selecting them as a guide, or source of inspiration, perhaps, or more simply as a benefactor who will help and protect you. The God or Saint receives the offerings you make, the benefit of any prayers you make as part of your devotion, and at times perhaps public recognition. It does not necessarily receive you as a devoted worshiper, but rather a devoted friend. You make routine offerings, spend time in prayer or meditation for them, maintain objects for your devotional work such as an altar, or perhaps simply a statue, an offering bowl and some candles. The means of outfitting your devotional efforts can be between you and the spirit. But having some physical central focus is both helpful in bringing your focus onto the spirit, but also it can provide faster means of connecting with the spirit. If there is a space dedicated for the spirit to take up as a residence, or some tool used as a conduit for contact with the spirit you may be able to more easily reach out and communicate with spirits with whom you have some alliance.

Other than Gods or Saints, the ancestors or the dead are common, and very good, choices for devotional work. Again, you're not entering into this as some kind of religious self subjugation or some deification of your ancestors. You're keeping open channels of communication, and maintaining, strengthening, and creating connections with spirits who can be powerful allies. I've spoken before about the benefits of work with the dead including the fact that they were once alive, and because they were alive they are aware of and ready to work towards the concerns of average people. It's also easy because we see this kind of relationship in historical magic as well as in folk customs and practices. It's a lot easier to sit down having prepared a deceased relative's favorite food, and then leaving out a plate of it for them while telling them all about what's happening in your life and your families' lives than it would be to do really hardcore necromancy. Fortunately you're probably not conjuring a deceased person to bind them in a pact. All your devotion with your relatives needs to be is routine contact to maintain the relationship, and the offering of food, drinks, or gifts periodically to not simply assure their favor but also to assure their strength and their connection to this world.

Both with the dead, and with Gods and Saints, our devotional work will often involve meditating at an altar or before some devotional object or picture. Frequently you'll give gifts and talk about what's happening with you. There may be prayers involved for the benefit of the spirit, or simply generally for your blessing. Otherwise most of your devotional sessions don't need to involve you asking for something. A lot of modern society associates all prayer with asking for something. Sometimes it's just about pausing to connect. Other times you might be thanking the spirit, or you may have discovered the spirit just likes certain poems or prayers and so they become part of your offering.

So by in large the basic devotional work of a magician can be pretty simple, or it can get more complex. It doesn't need to be tool heavy, but it can be if that's how you're called to approach your spirits.

Your spirits. In this case it means those spirits with whom you have a relationship. But it could also mean a familiar spirit, or a spirit given to your charge by a higher spirit. Some people build living vessels for their familiars and so work with the familiar may be very much like devotion work. For now I want to treat them as separate. Devotion work can be a little more casual, than other spiritual work. You don't have to seek to control the spirits, or move them from some far off place. For this, you're largely working with spirits that already have some overlap or connection with the world. But you're strengthening it by inviting them in and making gifts to them. You're asking them to work in this world and you're feeding them substances of this world. You're not just strengthening their spiritual capability by feeding it more spiritual substance; you are linking the spirits to the world by stirring up memories and desire.

So why go through this trouble, why not just get to the magic? Well, this is part of the magic. It's not just the act of magic, but also the preparatory acts which make us ready for magic which are a big part of success. When you have allies in the spirit world they become a spiritual currency for you, or spiritual street cred. Your ability to call upon and command spirits should increase as you strengthen the spirits who work with you and they are able to help provide you with authority in the spirit world. They can also help with controlling unruly spirits and keeping them to task. Another benefit though is the sort of invisible hand effect. They want to help you and they want to keep enriching your relationship with them. So as things happen in your life your spirits, especially those who have been alive previously, may recognize issues you encounter and help you with them prior to you asking because your spirits know you, they know what you need. So those little catastrophes in life might get smaller, or they might bring about less extreme problems, or problems from fewer converging sources than what we might expect with no one helping. With these things in mind, it's a good idea to keep your household or personal spirits in happy conditions.

Let's say you have three ancestors you're working with as your personal spirits. You do your initial rituals to set up a connection and awareness. Then after that maybe you keep an altar with a picture of the three ancestors, a candle for each of them, and an offering bowl, or maybe one for each. Basically simple things. Maybe small possessions belonging to the departed. Perhaps once a week you light the candles, make a small offering of whatever their favorite drink was and say a prayer or two or simply tell them about your life. You might mark special occasions like birthdays, and other holidays, particularly May's Eve, and November's Eve with extra ritual work or prayer work or special gifts. For saints you might use their prayer candles and cards and other Catholic resources. Similarly for Gods obtaining a statue or image and other devotional gifts can be simple. But all in all this model can work fairly easily regardless of which type of spirit, though for Gods and Saints it's useful to draw on the traditions to which they are native and accustomed.

As you put together this part of your practice sometimes there is a tendency to pick one spirit, usually a God or Saint, and think of them singularly as your patron. Or conversely some people grab on to every God, Saint, and Ancestor they can find and try to juggle two dozen at once. Start small. I started with one ancestral spirit, and then selected a few others who felt significant. Then, and this can be an interesting devotional task in ancestor work, began exploring stories of my family's past to flesh out my sense of my pleroma of ancestors. Now your ancestral practice does not need to involve setting up devotional shrines for each ancestor or markers to remember all of them. Your personal maiores (great ones), the handful to whom either you or your work are most connected maybe two or three early on, those should have objects set for interacting, others can be considered and acknowledged more generally. If you're working with a God, don't jump to tie yourself down to a patronage but note two or three who might help with your work, similarly you don't need to set altars for a whole pantheon of deities, the same is true for Saints.
Posted by BJ Swain at 10:00 AM