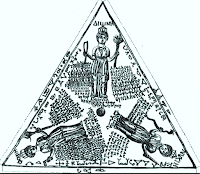 I was doing some work with Hekate recently, asking her to teach me more about herself, and about magic and witchcraft in general. It was interesting that she did not present to me anything I expected in response to me asking. She, instead, told me that I already understood enough about her, for the moment, but I needed to understand why I wanted to learn magic and what I wanted to use it for.

I've written before about knowing yourself, figuring out what you're doing and why. I've been in groups where I've been encountered by questions about myself and my goals as tools of initiation. I've been doing magic since I was a small child, studying it since I was about 11 years old, so here, 24 years in, it felt really weird to be asked by a Titan to examine myself and answer what was the point in doing magic. Because of course when a god asks you a question like that, it's not so much being asked a question as much as it is being forced into an immersive mental space where you're confronted with the ideas, and concepts of the questions and your own perceptions.

This kind of mental juxtaposition can be useful for opening a student, or ourselves, to truly exploring things beyond our current conceptions. When I get a new student in fencing who has fenced elsewhere this is similar to how I start their first lesson. I'll ask what their favorite fencing move is, and what technique they are best at, and what they're worst at. A lot of time our favorite thing and our best thing are different, even if we assume they're the same, and sometimes our worst thing is not as bad as we expect. Frequently once we start the lesson we start to unravel their perception about their relationship with these actions. We find the good things in what they thought they were bad at, the bad things in what they thought they were good at, and what about the thing they like best makes it their favorite and how we can make it better. This helps a student gain confidence as they begin with a new teacher because it shows them value in the teacher's ability to probe and develop. It also shows us that we have things we need to learn even in the areas where we thought we were solid.

This can be important for magic too. Sometimes we kind of coast through, reading books because they seem like they're cool topics. Doing rote rituals because we were told do them. Pray prayers because the words should reach out to things we think we'll want to connect with. Purpose helps make all of this more meaningful. And when we explore our purpose sometimes we have to realize the purpose we thought we had isn't real, or at least, isn't the ultimate purpose.

That paragraph was bad writing...but it illustrates a point which is much more easily explored through active immersion in the question. Any end we consider may be taken further, because our experience is not so finite as the end we think we are seeking. Why are we seeking that end, what is its more ultimate expression? We have to deeply know ourselves, and deeply know our work in order to explore further and truly understand.


Once we understand, it can open us up to a different sort of power and a different sort of development. One where through understanding ourselves and our relationship to magic more deeply we can hone in on how we're using it, and why, and what we're learning. One where we stop hampering ourselves through the falsity, or at least incomplete nature, of our assumptions.