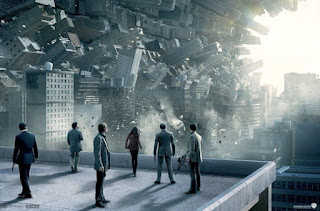 Christopher Nolan's amazing film Inception presented an interesting idea. A world where we could use science to probe into the minds of others and explore their dreams in order to find information we want. The “heroes” of the film are contracted to engage in an act of inception, a theoretical technique of implanting an idea in someone's dreams so that they believe it is their own idea rather than an idea with foreign origin. Most people working in their field, and most people in general assume this is impossible, but the main character, essentially a psychonaut, has explored the deepest depths of the unconscious mind and its dreamscapes and understands inception not simply as a theoretical reality but as a possible act which he has previously achieved.

This film presents some ideas of interest for us as magicians. Is it possible to take information from the mind of another? To explore their dreams? To implant an idea into their minds? What are the implications of these various possibilities, which very much seem at the center of sci-fi and fantasy fiction regarding magic and psychic powers?

As a boy, the first witchcraft my father taught me, and the act which I think is central to witchcraft, was that of bewitchment, or enchanting a person or animal by gaze in order to affect them. One of the first books I read on witchcraft as an adolescent talked about this idea and called it “mind bending” and described methods for inserting small ideas into people's minds. For the most part most books on witchcraft and magic don't really address this idea though. I am, perhaps sadly, not going to focus directly on the simple method of doing this today, but rather some ideas around magic intended to impact others.

Visiting dreams comes up in some traditional sources. It can go hand in hand with both pulling information or putting thoughts into someone's mind, in a fairly intimate way. Some elements of dream travel connect to some of the ideas we're going to discuss about influence. We're also not going to get too much into the mechanism of entering dreams though, at least not today. We're also not going to talk much about taking info from someone's mind, as in my experience, it's the hardest of these three things...and it's not really part of today's topic, which is about sensibly constructing an approach to affect others by moving past their resistance to the goal presented.

My mentor once wrote about becoming the historian and its usefulness for a magician. What he meant by this was that by attending to details and remembering the specifics of all manner of events with a high level of consistency people will rely on your ability to recount events. People will trust your memory of what happened, perhaps more than their own. There are several sources of power in this. One is growing an understanding of the movements and currents which shape events by seeing details and learning patterns. This can then be used to shape events by making decisions about what to do, or what to manipulate as events unfold. It also creates a position of influence in which you can shape the way people remember events as they begin to accept your knowledge of them more than their own. You can usually only subtly shape their view of what's happening, and your shaping has to prove out in a way that matches to the way events continue to unfold. With this can also come a level of trust in your ability to interpret situations. Creating this sense of being an authority and what has happened and what will happen trains people to accept your thoughts and ideas with less resistance.

Now this isn't simply a matter of creating a position where you can lie to people, although some people may use it as such. It can be a position where you can inspire and direct even if you focus on using true things that people may see or not see on their own. The essential component is overcoming the initial instinctual response to resist those things another person suggests.

While this might sound like social engineering...and on a level it is, there is a magical component to this as well. Your voice, your presence, even on a magical level, have a certain feeling to them. Even non-magicians will have a sense of that. If that voice or presence is one they accept then creating some sort of inspiration is easier because they are willing to accept that influence.

Willingness is another component. Not just being a force they recognize and accept, but allowing the opportunity to consent to influence. Draja Mickaharic in his works on magical and mental influence provides the advice that you should ask the mind to permit you to enter it. If you're trying to connect to someone through dreams, or trying to sense some information from them or impress some thought upon them, it becomes much easier if their mind gives you permission. Your mind simply has to take a moment and ask.

Not to get all chaos magic...but the parts of the mind being approached in this kind of work are not the conscious persona of the individual so much as unconscious and pre-conscious elements and therefore there is not the individualistic decision to retain a pure mental space. A gentle “hey can I come in?” makes it a lot easier to interact with someone than trying to force your way in and fight any resistance they have to thoughts and ideas that feel foreign.

Not feeling foreign can help too. Think about how that person feels when you interact with them. Think about their voice, not just its sound but its feeling, how they speak, what they say, and what it reveals about how they think, feel, and perceive themselves and the world. The more you can make the communication of your idea feel natural to them, the more it will feel like their own, or at least like an acceptable part of their complex of ideas and actions.

A lot of magicians aren't much for exploring ideas of psychic contact and interaction. There's a bit of a line there where some people engaged in work with psychism don't cross over to more obvious magic, and some magicians dismiss the idea of psychic phenomena or direct mental influence. I'm not advocating that anyone believe in the ability to read minds or implant thoughts through any sort of direct mental connection. Nor am I advocating that anyone engage in such work.

But some spell work we do, some ritual magic we do, does involve influencing or impacting people in ways which would be easier if we addressed how thoughts and ideas and goals work for them. You want a promotion so you do a working for your boss to think of you as the best candidate, but what does that mean to your boss? Does your boss even want the best candidate? What does your boss want or need in the situation? Say you call on an angel to inspire your boss to promote you but the area in which the angel works doesn't fit the job, or doesn't jive with your boss's humors? Say you dress your resume in a magical oil to attract your boss to it, and he reads it a bunch, but he doesn't like it? Understanding the situation and its components will allow you to understand how to shape your work and your goal to be well received by the situation.

Maybe your boss has someone in mind for the position, and your work does a great job making your boss think you'd be great for it...but his mind was already made up before you did anything. Maybe the decision isn't your boss's and you don't know that, so you make him think you're a great candidate...but it would've been better to do a working to fill his mouth with sweet words about you so that he makes others think you're a great candidate.

Analyzing our goal and doing a working we're comfortable with isn't always enough. Sometimes we have to work in a way which fits a situation, doesn't create new resistance, and avoids existing resistance.

Certain political magic that recently made the news was a good example of doing all of that entirely incorrectly, specifically from the angle of creating resistance both from the target and the target's supporters by highlighting the magical act. I don't think the target chosen there was even the best target.

In my view, a rather obvious example of working within the situation, feeling familiar instead of foreign, and avoiding resistance would look like this. Say a person of influence was about to make a decision, and part of that person's influence came from the appearance of being a good Christian, and the person's supporters were largely also good Christians. But people fear a choice that person might make. Say that choice, ironically, seems obviously at odds with Christian values and the teachings of Christ. The easy allies to call upon to lead the influential individual to our desired choice are Christ, the Saints, and various holy powers of Christianity...which...have been used in magic since they arrived on the scene. Rather than fighting the idea, or fighting the person, or seeking to curb their power...let Jesus talk them into being a better Christian. What I mean here is, rather than try and force them out of power, or force them to do something they don't believe...make them live the beliefs they claim to hold, because they're already open to that influence.

Spirit magic could be used to send inspiration, or simply use a petition paper with a Sacred Heart candle and an intention that Jesus warm their heart towards a more loving and Christ-like decision. This would be a way of working that speaks to the target and bypasses any attempts by prayer warriors to resist.

But again, that's just one example of this sort of thinking. In Inception their target had mental constructs built to defend from foreign mental influence and the psychonauts had to finds ways to evade them to achieve their goal. This is something we encounter throughout all areas of life, not just magic. We want something, someone else wants something else, we have to come to a place of compromise, or a place where they decide what we want is what they want, or at least is something comfortable and familiar to them.

So take a few steps in your work to bypass roadblocks. Open your work by calling upon the soul or mind of your target and asking them to be open to what you're working or sending them. Or give them some talisman whereby accepting it accepts such influence. Then work in a way which communicates a goal in a manner that they can accept, and that will feel natural to them. Where possible work with spirits and spiritual forces well suited to them, either by character/humor or familiarity.

If you enjoyed this please check out more and follow on Facebook.
Posted by BJ Swain at 12:00 AM