The Raccolta and the Holy Guardian Angel 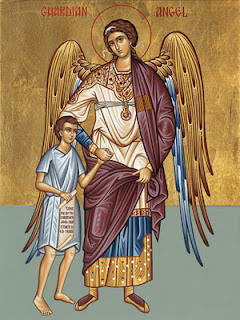 In my post yesterday on Lent I spoke about the unique moments of the Pascal season which provide liturgically significant times for spiritual work involved in connecting to the Holy Guardian Angel, and to The Beloved. The Angel runs parallel to the Prince of the Presence, who in early Jewish mystical systems was the angel charged with functioning as the apparition of God, and also as a guide forward into the higher realms of creation and unto the Palaces of the Divine Throne room. Along this path the angel also taught seals, passwords and invocations which gave access to the heavens and the spirits who resides therein along with their magical secrets.

For Abraham the Jew the function of the Angel was to teach the Sacred Magic and guide the magician in his magical endeavors, as well as to function as both an intermediary and a thwarting angel who singularly brought all demons within the purview of the magician's control.

In modern magic the angel is our guide, our source of power and authority and our connection to divinity.

Often people think of Knowledge and Conversation, or the Abramelin working, or Liber Samekh as the magic the angel relates to, but the angel is a part of our daily life and experience as a magician. Even for those who have not made firm committed contact with their angels, it is advisable to seek routine communion with the angel even from the beginning of one's magical career. If you have this communion already it becomes easier for the angel to guide you in determining if and when and how you should seek to make firmer your connection.

There is a lot of material in both magical and religious tradition which can be used for working with the angel. We've talked about some of it in posts here before, and we'll continue to do so. Since we took a stop into Catholic territory to discuss Lent I figured we could also look at a short simple prayer to the Guardian Angel from the Raccolta.

TheRaccolta is a collection of traditional Roman Catholic prayers which have been granted various “indulgences” by Popes. Essentially these are prayers which have been given added institutional power, a sort of official magic, which is supposed to add to their spiritual effect. Personally I think this is pretty cool. There are a lot of prayers in it which won't be of particular interest or use for the magician, but there are a lot which can be used in work with the Saints, the Dead, and of course the Angel. So for a magician working with these spirits this is a pretty awesome collection to explore because these are prayers which carry weight within the spiritual traditions connected to some of these spirits.

In the future we may explore some additional Catholic angels prayers (haha “may”...we totally will...) but for now here is a simple one we can look at today:

While we give thanks to God for having granted to each of us a holy angel for our guardian, we ought ever to bear in mind the respect, devotion, and loving confidence we owe to this blessed spirit; and with these feelings we should often think of him, and implore his constant aid with the following well-known invocation:

Angel of God, my guardian dear,
To whom His love commits me here,
Ever this day be at my side,
To light and guard, to rule and guide. Amen.

Pope Pius VI., in order to kindle the fervour of the faithful to have frequent recourse to their holy Angel Guardian, granted, motu proprio, by a Brief of October 2, 1795 -
i. An indulgence of 100 days every time the above-named short prayer is said devoutly and with a contrite heart.
ii. A plenary indulgence to those who have been accustomed to say it morning and evening throughout the year, on the Feast of the Holy Guardian Angels, October 2; provided that on that day, after Confession and Communion, they visit a church or public oratory and pray for the Sovereign Pontiff.
iii. A plenary indulgence, in articulo mortis, was added by the same Pope, in another Brief of September 2, 1796, to all who had been accustomed during life frequently to say the said prayer. In this Brief also, motu proprio, he confirmed the Indulgences already granted.
His successor, Pius VII., afterwards, by a decree of the S. Congr. of Indulgences, of May 15, 1821, besides confirming afresh the above-named Indulgences, granted -
iv. A plenary indulgence to all the faithful who say at least once a day, for a month together, the said prayer, Angele Dei, &c., on any one day when, after Confession and Communion, they visit a church and pray as above.”

I have included in our quotation the indulgence info just as an example.

The prayer itself does not need much updating to fit a less Catholic worldview. It's pretty standard in its connection to the angel. “Rule” might seem out of step for many contemporary magicians but it needn't imply submission to an authority so much as acceptance of a standard of guidance. It could easily be replaced by “inspire” if one dislikes “rule.”

The prayer could easily be said at the outset of the day, or before leaving for some task. It could be incorporated into a sort of rosary or used as a chanted prayer for meditation to connect with the angel. It is short enough to be memorized and could be used as a quick recitation to center oneself on the connection to the angel when the events of the day set you off center.

Adding a lamp or candle consecrated to the angel as a point of focus can be useful when praying such prayers. Anointing with Abramelin oil, or with an ash like that described yesterday can be another good material way to connect with the angel during such a prayer. Novena candles for the Guardian Angel or for the Holy Spirit, possibly combined with prayers on petition papers could draw a more magical focus to either building the connection or connecting the prayer into a magical petition to the angel.
Posted by BJ Swain at 3:12 AM